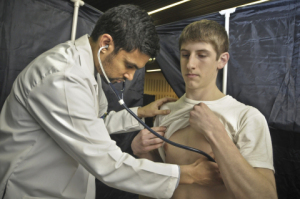 Every year, there are cases of young athletes who collapse and die at practice or during a game due to sudden cardiac arrest.  According to the National Center of Catastrophic Sport Injury Research, 15 high school athletes die each year from cardiac-related conditions.

Although American Heart Association national screening guidelines have existed since 1996, a recent survey by researchers at Seattle Children’s Hospital and the University of Washington revealed that just 6 percent of athletic directors are aware of the guidelines, and only 6 percent of doctors surveyed fully followed the guidelines to assess cardiac risk.

A Tampa jury awarded a $2 million settlement to the family of a high school athlete who died during baseball practice at Alonso High School.  More important than recovering financial damages, cases like these shed light on the importance of medical screenings and exams before playing, having a coaching staff prepared to deal with emergencies, and having automated external defibrillators present and accessible at athletic events, including practice.